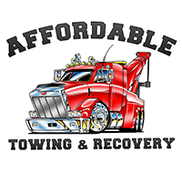 Having problems with Affordable Towing And Recovery?

I'm so happy there other people that dislike this company as much as I do. My first run in with this horrible company was back in October 2018 while I was working in the art district of Norfolk displaying artwork for the Norfolk art festival. We had been approved for the artwork and the location with emails to prove and had permission from the church and business building which shared the parking lot we were parked in. During the long process of setting up the crochet mural we went to use the bathroom in a restaurant not 20 feet from where we were parked and by the time we walked back her car was gone and they were loading my car up on their vehicle. I immediately ran over and started talking with the man and he told me if I wanted my car back it would be $155 which seemed very high, but if I wanted to get home that's the price I needed to pay. Then we proceeded to go to their office in Norfolk so my friend could get her car where we had our first run in with the nasty lady who always answers the phones. They have no signage posting clear prices, and no licensing that I could see. Tried calling back later because legally they are supposed to take pictures of your car in the area in shouldn't be in, they wouldn't give us any pictures of the vehicles which tells me they never took any.
This turned into me calling my bank and disputing the charge because I have out of state license plates (this is called predatory towing) and they were just trying to pull a fast one and take my money. They think they are fooling everybody because they know you'll pay, just look up Virginia state towing laws they are in the wrong. I got my money back and filed complaints against the company to which my bank opened an investigation on the allegations. This company has proven time and time again that they will tow just about anything to make money and there are a lot of innocent people paying for it.
I get it you have a job to tow cars but there is no reason to do it illegally or be nasty and cruel while doing it.
Another thing WORST CUSTOMER SUPPORT EVER, and it's always the same nasty lady. You would think an "affordabletowing" company could "afford" better employees maybe then they wouldn't have so many complaints. I'm calling you for a service not your attitude

AffordableTowing and Recovery Of Norfolk Inc. towed my vehicle from a business where the signs conflicted...

Affordable Towing And Recovery
50
%
This company is on the right track to keep up with incoming complaints, but there's still plenty of work to do.