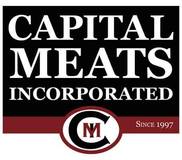 Having problems with Capital Meats?

I am complaining about the capital meats products

Yes I have a complaint against this company, there were two people a amn and a woman in a whit pickup truck...

First of all, 2 guys showed up at my house on 6/4/19 in NC, one of them knocking on the front door, after driving right past a No Trespassing sign. I went out the back door to see who it was and what they wanted. As I go around the corner to the driveway which is right at the end of my house, one guy is standing in front of my son's car pissing in our driveway, and the other guy is in the van. When the guy in the van sees me coming, he toots the horn apparently to warn the guy pissing in my driveway, then gets out really quick and comes toward me. He tells me he is from Capital Meats, and asked if I want to buy some steaks, chicken, or pork. I told him no I was not interested, and he said not even if I give you something for free. I told him no. He then stated they were on their way back to Bristol, and thought they would stop to see if we wanted to buy something. He then asked if I knew anyone else down the road. I told him no, and they left after the other guy got done pissing in my driveway and got his pants zipped back up. DO NOT BUY FROM THESE PEOPLE!!! As a company, you should try to have more decent employees! They better never show up at my house again.

my father, an elderly, was "strongly" persuaded into buying more chicken tenders that he will eat in 2 months.! let alone the different flavors he did not understand. He recently lost our mother, tried to be an honest person, and felt sorry for this salesman, although he couldnt recount the story he got from the salesman, he's 81 and has early dimension.. He sometimes doesnt think clearly or thoughtfully and I honestly believe he was taken advantage of. 180$ for this chicken was devastating to his bank account, he doesnt spent but that on a whole month.
your sales people should be more sympathetic and empathetic to the elderly population.. this is a horrible practice. He lives in falling waters wv, please stay away from him-norman baker
angie baker — daughter — should you consider some repayment.
[protected]
2000 captain dr
salem va 24153

So about a week ago around dinner time we had someone knocking on our door, thinking it was our land Lord I simply said come in not knowing it would be sales people, especially not meat product sales people. Worst decision ever, the sales person and trainee were both very pushy with the sale and also told us the story that it was his last case of beef and chicken. We told them we weren't too interested because we were short on making our ends meet to which he kept lowering the prices and bringing the cases of meat to show us. To be honest the steaks being frozen seemed like a great deal when he dropped the price, convincing us to finally run our CC to pay for it. So we ended up with a whole lot of beef steaks in our freezer to which at the moment seemed like the best deal for that kind of steaks etc.. until we decided to cook some up. The burgers that were supposedly not gonna shrink ended up shrinking very much, the NY strip steak that looked so yummy in that vacuum sealed bag also cooked up to nothing and tasted funny and it was too tender for it to be NY steak. All in all that was the very 1st and also the very last time we are ever buying from them or salesperson that come to our door, if I could give them a -4 star on the review I would

On at least three occasions in the past few years I have been approached by people in Capital Meats van...

my complaints about the food I purchased from capital meats.. I was very displeased with the products... it doesn't taste authentic and was very tough

On father's day, 2 guys knocked on my door to sell meat. I wasn't interested.. but, then they convinced me to...

I recently purchased the Premium Steak and Premium Chicken options from a driver who came to my door. The...

Where do I start Van smelled like weed some guy named reginald lewis tall brown skin male he where his hair...

A Capital Meats, Inc. van arrived at my home at dinner time with such "A great offer" and a sob story about "his last 3 boxes, he just wanted to get home." I'm handicapped, I had my 5 yr old granddaughter and I fell for the scam. The rep said his name was Ronnie. He wrote his number on my receipt and assured me (and my husband via a video call) that IF we had any problem or were dissatisfied he would replace, refund, and schedule a time to pick up the steaks if for some reason we were not happy. But he knew that wouldn't happen because the number he gave me the people answering it say there's never been a Ronnie at the number. Calling the 866 "Customer Number" is useless. No matter the time of day, the call goes to voice mail and they WILL NOT return the call.

Buyer Beware. This is a total rip off. The steaks are so tough, grisselly and have a peculiar odor. It's not fit for human consumption. IF you are approached or see these people in your neighborhood do not buy anything.

Why is my house out of my entire neighborhood singled out for the shady looking people to come up to my...

The truck smelled like Marijuana. I informed the salesman I was only interested in healthy meats...he offered...

They are scammers. They prey on older people and women. Poor quality of meat. Bought meat one time it wa...

A capital meat truck came to my business this week, after 45 minutes of telling the salesman I was not interested... Simply did not need any meat... I bought a box of fillets... Just to get rid of him! Last night we had the steak... Worst steak ever... Tough... No taste... Just awful! I hope he comes back just one more time... I won't even feed this to my dog!

The filet mignon I bought was atrocious. It was so tough I couldn't even get my steak knife through it...

Two Salesmen arrived at our home April 28, 2015 the same time my husband was coming home at end of workday...

This critique was intended for a company named 'Capital Meats, Inc.' (www.capitalmeats.com) I would...

The cases of steak, chicken, and seafood brought to your home by door to door sales people are given to the...

A salesman from Capital Meats showed up at our door, and we made the mistake of buying from them. We discovered after they left that we had paid over $9 a pound for the meat which was far too much. We also have not been happy with the quality. The burgers that were supposed to be lean were extremely fatty. I had to drain the grease from them while making them. The steak ended up being half the size when we grilled them. This was so totally contrary to what the salesman claimed. I will never buy from them again.

We paid $548 for the steaks, ground beef, filet mignon, etc. The first meal cooked on the grill was NY strip...

Capital Meats
0
%
Doing nothing would be this company's favorite pastime, if they had the energy for it.