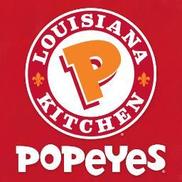 My husband and I have eaten at the "new" Popeyes restaurant twice. The first time I had a terrible stomach ache only - but last night I had diahrea 5 times or so. I had terrible pains, and sweats all day today. I don't know what is in the spicy chicken batter but something isn't agreeing. My husband has a much higher tolerance than I do and he also had the same result. I am just glad that we didn't feed my son the chicken. Since he isn't a "spicy" eater he just had the biscuits and mashed potatoes. It's a shame that this keeps happening because I totally like the flavor of the chicken. Unfortunately I can't take a chance in the future. It's not just us either... I asked someone did they eat at Popeye's yet and his response was yeah but it gives you an upset stomach. (his wording was different). I surely hope this doesn't happen to anyone else.