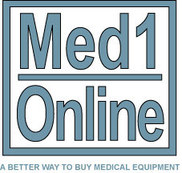 ComplaintsBoard.com is not affiliated, associated, authorized, endorsed by, or in any way officially connected with Med1Online Customer Service. Initial Med1Online complaints should be directed to their team directly. You can find contact details for Med1Online above.

Use this comments board to leave complaints and reviews about Med1Online. Discuss the issues you have had with Med1Online and work with their customer service team to find a resolution.

I purchased a used Luxar L20i medical laser on May 14, 2008. The laser was advertised on eBay to be in “excellent condition” with a “new tube, ” and “reconditioned and guaranteed to function to manufacturer specifications on arrival, ” with a “90-Day Warranty” complete with an “Owner’s Manual.” See enclosed.

The laser wasn’t ready when I ordered it, although my VISA card was immediately debited. I was given various excuses, including that the laser was “getting a new tube at LuxarCare” during the two months it took to ship my laser. I have since learned from LuxarCare that LuxarCare has never serviced my laser.

I had the laser shipped to Oxnard, California where is was then placed, still in its shipping crate, in a pallet crate of soft goods, and shipped to Christchurch, New Zealand.

The pallet crate arrived undamaged, with the laser carefully packed inside the soft goods in its own crate, which was also undamaged.

When I attempted to start the laser, it displayed fault “6” every time. I was assured, previous to purchase, that the laser would work with New Zealand 50hz mains power (converted from 240v to 120v). When I contacted MED 1 ONLINE, Doug Kath, a technician, told me that fault “6” meant that there was a problem with the tube, or the internal operation of the laser, and not the mains power.

I complained that I wasn’t given an operator’s manual, and they said they would send me one. They offered no other help, other than they were going to check to see if their warranty covered me in New Zealand.

Later, a laser repairman in Auckland, a two hour flight away, said he may be able to do something if he had a service manual. I was told by Doug Kath, at MED 1 ONLINE that a service manual couldn’t be sent to me because of “copyright issues.”

Then MED 1 ONLINE suddenly fell silent. They wouldn’t respond to my emails, and when I called, I only got voice mail. I never had a response from these voice mail messages. When I asked the operator to take a written message, she absolutely refused.

I began to realize that I was dealing with a company that wouldn’t honor its commitments. I had to start all over to find another laser, and decided to return the laser to MED 1 ONLINE. My email stating that I was planning to do this resulted promptly in the only phone call, ever, from MED 1 ONLINE, Genessa saying that they would not accept my laser, and that if it arrived they would just store it, and charge me for storing it.

A series of emails and phone calls followed, where various positions were taken and fictitious statements were made by MED 1 ONLINE. I was told that the Warranty I signed didn’t cover the laser in a foreign country. I asked for a copy of the Warranty I supposedly signed, they wouldn’t send it to me.

These phone conversations became progressively hostile and threatening. They would say one thing, and then contradict themselves later. They laughed at me. I was transferred from one person to the next, until I finally got voice mail. My calls were never returned.

Melinda at LuxarCare (where I was told my laser had been refurbished with a new tube) told me that my laser (serial number, bar code) had never been seen by LuxarCare. Melinda called Penny Murdoch, supervisor at MED 1 ONLINE, and found out that my laser was last serviced in January, 2006.

Repeated emails and telephone calls were made to MED 1 ONLINE to attempt to get the maintenance records for my laser. I was told they would be forthcoming, but had to be “summarized.” I was told it was serviced at “ISP, ” but when I repeatedly asked for more information on that company, because I couldn’t find it on the net, they wouldn’t tell me. I believe that “ISP” does not exist.

I was told at various times by MED 1 ONLINE that they wouldn’t receive the laser if I returned it, that it worked when they sent it, and that I bought it “as is.” I was told at another time that if I shipped it back to MED 1 ONLINE (at my expense) they would take a look at it and repair it, and I would have to pay the bill, whatever the cost. There would be no guarantee as what the price would be for repairs. But, they would not give me an authorization to return the laser. After this repeated nonsense, I suspected the integrity of MED 1 ONLINE, and decided not to send it back to them.

In summary, I bought a laser on eBay from MED 1 ONLINE which was described as being in “excellent condition” with a “new tube” and was guaranteed to be in working condition when delivered, a 90-Day warranty, and with accessories including an Owner’s Manual.

I received a laser that wouldn’t work (fault 6), without an Owner’s Manual (although I was twice promised that it was mailed, it has never arrived) and the laser was dirty with the accumulated grunge of long use.

I don’t believe the laser was “reconditioned” or even worked when it was shipped, it wasn’t even cleaned, and was sold inoperable to me as someone who was overseas and wouldn’t be able to do anything about it.

MED 1 ONLINE fraudulently sold me an old, worn-out, broken laser rather than the advertised product I purchased. And they repeatedly treated me very badly.

I am now out several thousands of dollars and so far away that they know there is nothing I can do.

Med1Online
100
%
This... this rating shouldn't even be possible. Not every mother cares about her own children how this company cares about their customers. Perfect!