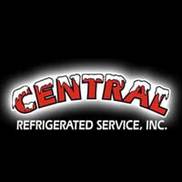 On June 23, 2011 at 3:20pm, I was traveling on Highway 2 headed to work. This truck driver driving for Central Refrigerated, flew past me in the opposite direction, speeding like heck, when he veered off into the dirt road. As a result, a rock flew up and hit my windshield, I turned around and followed the driver. When we got back to his place of employment, the driver got out of his truck and when I told him what he did, his only response, was "So, Man what do you expect me to do about it". First of all, I'm a woman he was talking too and to have the I don't care its not my problem attitude was uncalled for. I then asked for the manager, and he came out listened to what I had to say and gave me a business card asking me to call someone else? Really, this manager didn't know how to handle this type of situation? What really got me, was when the shop maintenance staff came out to see what was going on, they began laughing at me, like it was a joke. What happened to asking if someone was ok? I took pictures of the smashed windshield and damage to my vehicle along with geting the drivers name, tractor/trailer information and asked for copies of the drivers paperwork to ensure he was completing proper pre/post trip inspections, had checked his tire air pressure, and had correct tire tread depts and ensuring he had a safe vehicle to drive. After I was rudely denied this information that is private, according to risk management, I was rudely told today that this company is self insured and will not replace my window. Fact of the matter, its not their problem. This company has nerve to call themselves a professional trucking company in the transportation industry. Obviously they had something to hide. THE TRUTH!!!

My message is more an inquiry than just a complaint. The thing is my husband is the actual driver. But, I say we went into this thing in the blind because it affects our whole family. He has been driving for Central since January. He went straight through from Comapny driver to Owner Operator because he was advised that is where the money is. His plan was to become a trainer after putting in his owner operator time; well they are no longer taking on new trainers. So, he has been driving as an owner operator: has switched dispatchers twice due to lack of mileage, then the truck broke down-he has driven multiple weeks to receive negative checks or minimal checks because the company always takes the truck payment and repairs leaving him no pay. I just want to know is this standard procedure to work and not get paid. If not, can anyone direct us to a lawyer. At this point I just want him to be relased from working for them and not have to continue to pay for the truck, etc. Please only respond with serious and helpful answers. Thanks

Central Refrigerated Service Inc
50
%
This company is on the right track to keep up with incoming complaints, but there's still plenty of work to do.