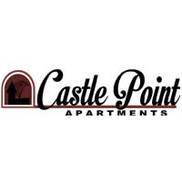 Having problems with Castle Point Apartments?

We moved in August of 2007. Our rental agent gave me our keys as she unlocked the door...went through the whole house turning on all the faucets, checking the lights and the appliances..told me everything A O K and had me sign the form saying i've found everything in working order on day 1. Great.. i can't finally move all my stuff in..i've only been on the road driving from california for the last 4 days with my son and cat...i was freakin' tired. Within the first week..the second bathroom faucet was so covered in green crust it had to be replaced, the light fixture in the ceiling fan had to be replaced. Both little things you say? yes..you'd be right. However...a few weeks after that..we noticed that the dryers in the laundry room had to run twice to ensure a full dry load, the lights on the outside of the building were being held together with wire wrapped around them, and the doors all had peeling paint and dryrot on the bottom..then...the fridge stopped freezing and had to be replaced, the dishwasher wasn't working and had to be replaced and the trash compactor that was so dirty when we moved in i didn't even want to touch it ..was replaced with another cabinet...thought even IT was to tall for my counter and pushed the counter up at least an inch above the rest of the counters...not long after that...stains all over the carpeting started to appear...urine..in all the corners *my cat uses a litter box*..and some LARGE dark stains near the doorway...we call to have it looked at ..and Judy the manager asks me if we've had keggers because alot of the tentans are college students??...no...i have not had any keggers...true ppl this is what she's asked me...THEN...a month after that...in the parking lot behind the clubhouse is where we park our second vehicle...3 children thought it would be WAY fun to throw rocks and parts of the brick wall over and at our truck...leaving dents and cracking the windsheild...when we *my husband and I* approached management...we were told that because MANAGEMENT didn't see the kids who did it...we should file with our insurance company. Great...but here's my favorite part about the management here at castle point...for some reason..still unknown to the contractgors...the second bedroom..where my son sleeps...the ceiling collapsed. Not just a little piece...or a crack...we're talking the entire thing...all the way up into the rafters ...he'd been awake at this point for all of 20 minutes and thank god was NOT in his room...everything however IN his room..was destroyed. When i call the office ...the ### at the front desk tells me she can't find the maintenance man, but will send him as soon as she can find him.??? wt? I call again 15 minutes later to see if she's found the missing man...but to no avail...I then ask her if she realizes the severty of what I'm telling her..only to get an attitude. Of course...what did I expect? Once the contractors show up...all three of them can't believe that without water damage why it fell...and keep saying how sorry they were. Not once did the wonderful judy woddle over to my apartment to talk to me about what happend...her only response once WE went in to see her...was ...well...was your son throwing a basket ball at the ceiling? W T F...seriously ppl...a basketball? ...first off no..he doesn't own one...second even if he WAS throwing one...it would have made a hole...not bring down the 10x12 ceiling. She also informed us that we should turn all damaged items into our insurance company. Which means that in the 15 months we've lived here..we'd have had to turn in two claims to our insurance..and up until Castle Crap Apartments..we'd never had to turn in a claim ever..All the while ..at least once a month the maintenance ppl are called out to fix the toilet because it gets stopped up..ALL the time..a few times even overflowing to such a degree that the downstairs aparment suffered water damage. I do know how to turn the water off via the knob near the back of the toilet...but when i looked for the knob...there wasn't one..it had broken off...i was asked however once...if my 14 year old son ever plays in the bathroom and could have possibly put something in it...one of the new guys even offered to replace the whole thing..but was told no...just keep plunging it till it works again. The list is endless ppl, please don't bother living here...

Castle Point Apartments
100
%
This... this rating shouldn't even be possible. Not every mother cares about her own children how this company cares about their customers. Perfect!