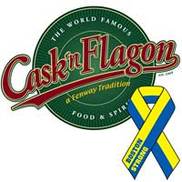 Having problems with Cask 'n' Flagon?

This last weekend I went to boston to reunite with alex cora's a former baseball player from the red sox relatives and friends.

As a big group, about 15 people. The first group arrived first in cask'n flagon sport bar when I got there they were in the sport area and they started to eat, drinks and were enjoying the game, but since we were waiting for more people, one of our friends ask a table for more than ten people.

After long wait we got the table but only for 8 people and the restaurant was not so croud and there were more tables that they could accomodate, but we didn't complainted and we started to sitdown and the rest were stand beside our table, after 5 minutes the waitress informed that we should not be stand besise next to our table area and we should move and go back to the table. So, I understand that she was following some instructions but I replied to her that we asked a table for more than 10 people not for 8 since we were waiting for more people so she went to the frontdesk with an attitude and she came back and apologized to us that she didn't know about it. So I asked her if she can move tables close to thatarea since were a lot tables available. So, she did move us with the food to another table but this time with only for 10 people and again we didn't complaint so!! We sat down and must of us moved to the bar without any problems or complaints, but after 10 minutes someone came to us and asked to move back to the first table since we can't have two waitresses?? So, I didn't understand and I asked her the reason of why we should move when we asked a table for more than 10 from from beginning and they gave us only for 8. She started to argue and still demanding to move when I was explaining the reason of why we moved then she replied "i'm afraid I going to move" with an attitude and demand to talk to her manager and guess what!! She was the manager and really nasty.

So I told if she was telling that since the other waitress is not earning money we can't move??

When one of our friends relplied "you know don't bother, we are leaving right now so please ask to the waitress to bring the check right now"

I was soooo upset and I told her I will talk to the owner about treatment that they were giving to us. She should not tell to any customers to move the orginal assigned table when customers are not comfortable with the table or whatever reason.

Then, she went back to her staff and asked why was the reason they moved us. When she found out then she apologies but was too late when I had explained her the reason of why.

So we were leaving and we were waiting almost close to the entrance for the rest of the group where they were drinking. While we were waiting I went to the front desk and I ask for the name of the owner, the recepcionist gave me the card and 3 minutes later a young guy came to us and asked us to leave the place for not reason, so my friend ask the reason of why we were only finished our drinks in order to leave that place and we were not looking for any trouble. So, one of alex's relative told him if he had problem because he was nasty. I told him I will report this to the owner and guess he replied.

You can call whatever you want the owner but you have to leave!!

So, I was wondering what was the reason of why we were treated like this when we were just having lunch and drinks and spending a lot of money overthere.

And guess what I found out. The reason of they treated us bad was we are latin and we were talking spanish. That the only reason we can think of. After we left we stop to the next sport bar and there service was phenomenal, amazing place that this group spent more than 2, 000 dollars in drinks and food.

And we will going back to the same place.

Now, I sen't an e-mail to the owner and until today he had not replied my e-mail.

So this is one the reason I want to report a complaint.

Cask 'n' Flagon
0
%
Doing nothing would be this company's favorite pastime, if they had the energy for it.