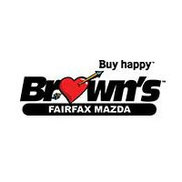 Having problems with Brown's Fairfax Mazda?

4.13.2012—test drove Mazda with Mike Rafaie. Interior of car did not look detailed.

4.14.2012—test drove 2009 Mazda 6 with boyfriend in the morning. Interior of car did not look detailed, but was still interested in looking at other cars.

4.14.2012— I test drove the 2010 Honda. The Toyota had sold. 2010 Honda’s interior still was not detailed. When we both sat down with Dean and Mike, the issue of PDI came into play that that would be another $700. He explained that all the cars have this included in the price. And broke it down that it was based upon the cars on the lot and the cost to maintain the quality of the cars. I mentioned that I was not prepared to pay the amount of the deal---$19260 plus $400 taxes, $400 processing fee $700 PDI.

He told us that the car could sell any day because of the price. The carfax shows that it was offered for sale September 2011 and again in December. There were receipts for gas dating October and November 2011 in the console of the car. He explained that the managers sometimes get to drive the cars around until it is sold. The odometer reading was approximately 2K higher than on the website.

Dean said that the website price was a mistake. The car should be $19, 260 and I misunderstood to whom would be paying the taxes. He kept reminding us that I was getting a great deal and that he could not go down in price, because he would lose money in the deal. I declined.
They lie, they cheat, they steal!

Brown's Fairfax Mazda
Doing nothing would be this company's favorite pastime, if they had the energy for it.