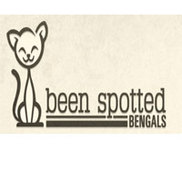 Having problems with Been Spotted Bengals?

We contacted Edward (Eddie) in response to his ad for purebred bengal kittens on kijiji.com. He wrote us back rather quickly through email. We asked what we thought was regular pertinant information about the kittens (there were two), health guarantee, shots, worming, ect. He told us they would be guaranteed. No details about the depth of guarantee and he could not provide us with a copy of a pet contract. We also asked about the kittens parents and about his breeding practices. He replied that he had been breeding two years and that he lived in a house. We got very short answers providing us very little information. Red Flag!! His spelling, grammar and use of nasty slang words really made us wary. He asked us little or no information about ourselves and didnt seem to care where the kittens would be living. Red flag!! We asked if he could provide us with other breeder or kitten references or recommend any other breeders in Washington as we were hoping to get a male and he thought the two just born were females, he stated that doesnt work with any breeders in Washington State and wouldnt recommend any of them other than one who provides him stud service and he didnt know if the would provide a reference for him. So he could provide no references whatsoever. Huge red flag!!! We found this very strange and unnerving. We also began to notice that in his answers to us he would write us in his wording then copy and paste a paragraph from a website to answer our questions. Nothing was in his own words! (pretty obvious to tell seeing as how his own spelling is atrocious) Even his web pages are copied directly off someone elses page. (See his purchasing information and contact us page and the cattery that is the father of the kittens purchasing information page.. I wonder if they know he copyrights their information?) In our research for bengals we found that most breeders test for HCM, a heart disease. When we asked Edward about this he said he doesnt test but that his cats are stool tested. When I mentioned I thought fecal test were to determine whether they have worms or not (its been awhile since I've had a pet) he said no this means they're healthy. In our last email I thanked him but told him we were going to look elsewhere for a kitten and that being stool-checked doesnt necessarily make us feel safe about the health of kittens he called us stupid and told us that we dont know what we are talking about because this first litter was fantastic (remember he told us he had been breeding two years?) He got rather nasty and rude. We wished him luck and moved on quickly. We have since found a wonderful kitten with HCM tested parents and a full health guarantee in Eastern Wa. My wife who has a very soft heart wondered about the kittens at Been Spotted. She emailed him from her email address asking if they are still available about 2 weeks after our last contact with him. His reply was "they r both died." My wife literally cried and wondered if we could have saved them. I for one am glad I did not purchase from Been Spotted and hope everyone else out there will continue to do research before buying a purebred cat. Make sure your breeder is educated, has references, provides health guarantee and is more than educated in the breed. Dont buy from this obviously uneducated backyard breeder.

Been Spotted Bengals
100
%
This... this rating shouldn't even be possible. Not every mother cares about her own children how this company cares about their customers. Perfect!

Most Discussed Been Spotted Bengals Complaints