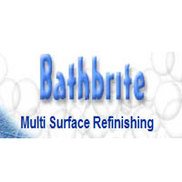 In July 2007, I contacted Bathbrite about refinishing a shower and a bathtub. I had looked at the web site. They offered a 5 year warranty. Their prices seemed very reasonable. The shower was going to have to be redone and the bathtub either needed to replaced or refinished. I decided update the master bath and kitchen counter top. The owner of Batbrite assured me that the stone finish was almost as durable as laminate.

By September 2007, problems began to appear. The stone finish of the kitchen countertop started have spots apparently flaked off, and the original laminate top showed through. The Stone finish on the vanity had a spot missing. The finish on the shower floor began to disappear. The bathtub, which had never been used, showed some faults. Having all four items done fail within a two month period, I contact the owner of Bathbrite, and requested a full refund of $1791.26 for all work performed. Bathbrite did not want to refund the money. Instead, they wanted to repair everything at no cost. Reluctantly after all items had failed, I agreed to let them redo the work.

Bathbrite redid the work in November 2007. They touched up the tub, touched up the spot on the vanity, refinished the shower floor, and reapplied stone finish to the kitchen countertop. The owner of Bathbrite personally supervised the job. Supposedly several extra coatings were used.

By February 2008, I again contacted Bathbrite with more failures. (1) The spot repaired in the vanity never matched. (2) The shower floor looked horrible (3) No one would even use the bathtub. It felt gritty and we were afraid to clean it or the surface would come off. (4) The kitchen countertop again had spots coming off, revealing the original laminate surface. There is a concern these flakes of the chemicals may be getting in our food. I, once again, asked for a full refund $1, 791.26. Once again, Batbrite wanted to come and redo the work.

Considering Bathbrite had redone or touched up everything twice, and nothing has lasted more than a few months, it just did not make sense to do it again. Bathbrite did not want to honor their original warranty of 5 years, as advertised on the internet. They did not want to live up to the claims of their owner. They wanted to honor a different warranty on the back of their invoice, which was never seen until after the work was done.

Bathbrite wants to advertise one warranty (5 years) on the internet and try to live by another on the back of an invoice no one even sees till they pay the bill. I would never had used Bathbrite had I known they did it was not the same as on their web site. It will cost me more that I paid Bathbrite to get the work they did replaced.

Bath-Brite
0
%
Doing nothing would be this company's favorite pastime, if they had the energy for it.