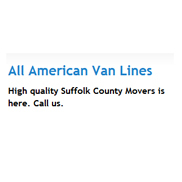 Having problems with All American Van Lines Inc.?

hired american van lines tomove me from SC to Mesquite Nevada. There rep told me that it would be so so...

The complaint has been investigated and
resolved to the customer's satisfaction
Resolved All American Van Lines, Inc — Moving Company Scam

On 1/2/10 I moved to Austin, TX and left the bulk of my items in NY because I was not able to transport them at the time. On 1/13/10 my father rented a U-Haul and, along with my brother and nephew, brought the remaining items to The All American Van Lines, Inc. located at 303 Smith Street, Farmingdale, NY [protected]. They were told that the items would not ship that day, but more than likely would go out that Friday and arrive to my home in Austin by the following Mon or Tues. They did not. We waited until 1/22/10 and contacted them regarding the whereabouts and delivery of my items. We were informed that the items just shipped that day and would now arrive the following Wed or Thurs. They did not. On the 28th we called again - please note the moving company has NEVER initiated any contact with us to inform us of any delay with shipping- and were told that the truck was being "held up" because they had other pick-ups and drop-offs to make before they arrived in Texas and my items would arrive on the following Mon or Tues (2/3/10 or 2/4/10) - they did not. Again we called on 2/4/10 and were informed that the truck blew a fuel gasket(?) 2 days prior - again no notice of such was given to us by the company - and it would now arrive on Mon or Tues (2/8/10 or 2/9/10) - it did not. I called again to follow up on 2/8/10 and was told that the fuel gasket blew again and the truck is "assumed" to arrive now on 2/11/10 in the evening.

The company has never initiated any contact with my family to inform us of any delays. The company was not able to provide us with a 'hard' delivery date. The company has not been able to locate the truck to even tell us what state it is in. When the company first told us the gasket blew, I was informed by their sales representative that it was being repaired in Texas, my items were safe on the truck and would arrive in fine condition in a few days. Yesterday, another agency representative named Zachary, told me that the truck was NOT in Texas and he was not sure what state the truck was in. A friend of my niece's works for this company and because of that, the sales rep mentioned "we are doing you a favor. You'll get your stuff. You could have paid triple if it wasn't for us" implying that since they offered a discounted rate, we should ignore their poor business practice. He then said that since we did not specify an exact date, they could take up to 90 days to deliver my items if they wished - a factor that is NO WHERE written in their contract. And may I add, the contract was not even filled out completely. They left several areas blank.

We were advised by the FBI and Suffolk County Police to make a report and follow up in small claims court. Today, 2/9/10, my father and brother did file said police report and were told to file in court on Friday 2/12/10. I have also reported this matter to the Better Business Bureau and the Federal Trade Commission. We are anxious and concerned because this company can NOT provide an exact date of delivery nor can they even tell us where this moving truck is.

I had offered to meet the truck in Texas to retrieve some of my items when I was initially told that the truck broke down in Texas and was then told they did not know what city in Texas the truck was located. All persons that we have contacted agree that their actions are unprofessional and should cause some concern. I am worried that this company has either sold, damaged or lost my possessions and are too afraid to inform us of that matter.

Sadly, I think that they are gone for good. My father only used this company to prevent me from driving back to NY from TX to obtain the remainder of my items. I have read several complaints online regarding companies that share this same name. I can only hope that they are not affiliated with what I have read about online.

All American Van Lines Inc.
50
%
This company is on the right track to keep up with incoming complaints, but there's still plenty of work to do.