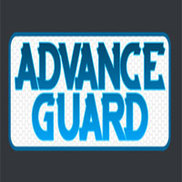 Advance Guard Service is a scam. When I called them it was a cellphone number, Someone name Mr Morran picked up. He told to come in even though I didn't have any experience. He told me to bring $80 with me. When I got there he told me the class would cost 349 and that the job was guaranteed. He also told me that I wouldn't have to worry about going on any job interviews and that I would start working right after I finished the class. Granted, when I finished the class they gave me job placement. When I went to the place I was expecting them to tell me okay, fill out these paper work and you can start working. That wasn't the case, I went to three places after that still know job. To make a long story short. These people then hired me to do telemarketing for them. They told me all I had to do was call homes an return phone calls to people that were interesting in finding a job. I worked there for three days and I left, because I couldn't lied to these people. I found out the same thing they did to me, they were trying to do to other people. I went back asking for a refund for my money. They said they couldn't give me a refund and If I have a problem with that TAKE THEM TO COURT. So I plan on doing just that and some. People please stay away from Advance Guard Services (AGS) Bay ridge brooklyn, RTCE Corporate security #[protected] located in 41-21 29th street, Queens boro plaza, long island city. I worked there for a three days and I left those people are unprofessional and con artist. If you call a security school and they tell there is CLARENCE WILLIAMS, PETER EMANUEL, SEAN MORRAN, MS LISA, MS DESTINY, MR ROGERS. Those people are all con artists, I've watched and listen to them work. If anyone see this and it happen to them EMAIL ME @[protected]@yahoo.com. Those schools needs to be shut down. You don't take people's money, lie to them and don't find them a job.

Advance Guard Services (AGS)
100
%
This... this rating shouldn't even be possible. Not every mother cares about her own children how this company cares about their customers. Perfect!