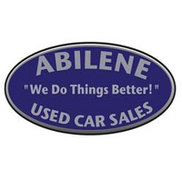 These people were extremely rude to me whenever I called and they failed to report to my credit report as they promised. Promise to fix but never did.

I purchased a vehicle from this company in February of 2009. At the time I had a really bad credit history and Sbilene Used Motors were the only ones that would finance me for a car. Jennifer Lovelady, an employee/manager, also said that they would have to report it to the credit bureau. Which, if I made my payments would improve my credit rating. So I signed the contract and it was all downhill from there. The next day I got a call from Jennifer and she started asking all these strange questions about my mother. I asked what this was all about and she said, "We have reason to believe that you actually bought this vehicle for your mother." I didn't know where she was going at with this, but I told her that mother is in California and for personal reasons she can't drive. I asked her not to call me again unless it was important. Then she threatene me and said "Well I think we made a mistake in selling you the vehicle." To this day, I have no idea what all that was about, but it completely angered me. The receptionist would sometimes call me a day or two before my payments were due and tell me that I needed to pay on time or they'd take the car away. When they fact is that I would always call and asked if they could work with me if I was going to be late. She would just say, "Well.. I'm just letting you know." I would always dread calling because they were always rude and would act like I'm ***. In October 2009 I checked my cedit report and they hadn't reported anything. I called to ask why and they told my that it takes a while. In December of 2010 I was in an accident where I was rear ended and it totalled my vehicle. My insurance covered it and I paid off the vehicle. Sometime in January 2011 I got a copy of all 3 credit reports and was stunned when I saw that my credit had not improved. It was then that I realized that Abilene Used Motors never even reported it. I called and they would always say that they would talk to the person in charge of it and call me back. Weeks passed and they never would. March I called and Jennifer got on the phone and was very aggressive " I told you that we would call you back!". I finally got a hold of Wanda, the person in charge of all the financing, and she said that they recently switched names and that it would take all the paper work was messed up, but I was first on her list and she would report it right away. I called today, May 3 2011 and that same lady, Wanda, tells me that it's going to cost them money to report it so they weren't going to. They aren't going to do anything about it. So I basically wasted 2 years paying for a car that I could have bought off the street.

Abilene Used Car Sales
Doing nothing would be this company's favorite pastime, if they had the energy for it.